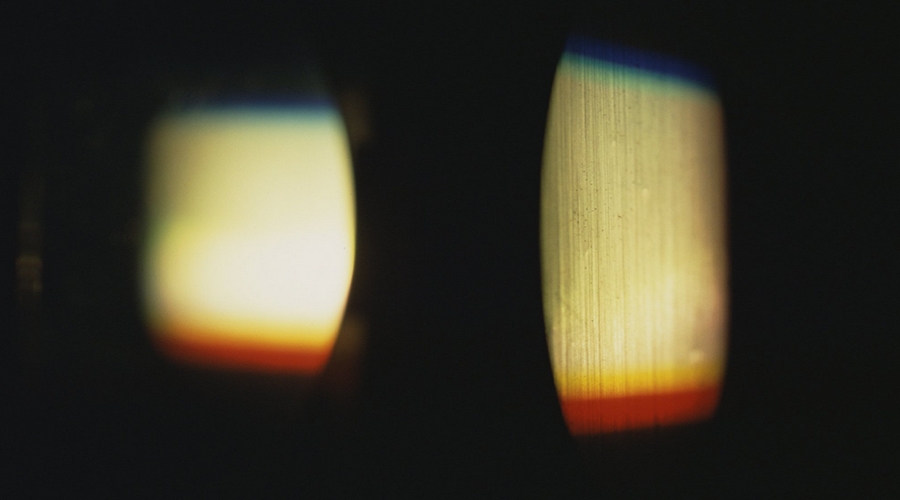 Colour Opponent Process is the first ever commercial gallery exhibition by Aura Satz. The artist will premiere a new film A Doorway for Natalie Kalmus. Centred around the use of colour in moving image technology, Satz will explore the disorienting technicolour prismatic effects effects of the lamp house of a 35mm colour film printer.

Through minute shifts across an abstract colour spectrum, punctuated by a mechanical soundtrack, the film evokes kaleidoscopic perceptual after- images bringing to mind Paul Sharits, Dario Argento and the Wizard of Oz. Natalie Kalmus was the ex-wife of technicolour inventor Herbert Kalmus, and was the colour consultant for hundreds of colour films, including The Wizard of Oz, Gone with the Wind, The Red Shoes, Black Narcissus and many other movies. She would draw up colour scores for each film like a music score, according to her theory of “Colour Consciousness”. For the soundtrack Aura Satz has collaborated with composer Steven Severin, founder-member of Siouxsie and the Banshees. Alongside the film,Satz will also present two 35mm film-strip ‘colour code’ works.

Continuing her interest in women’s impact on technology, particularly their contributions to early film history, Satz will also present Joan the Woman – With Voice, a series of three photographic lightboxes which relate to cinematic representations of Joan of Arc in early colour film. Cecile B. deMille’s silent feature Joan the Woman (1916), starring opera singer Geraldine Farrar, is mostly monochrome, except for the culminating flame sequence in which Joan of Arc is burned at the stake. This remarkable orange coloured climax was the first ever use of the Handschiegl colour technology, a semi-automatic stenciling process, which removed the painstaking labour of hand-tinting and hand-stencilling which had characterised the introduction of colour in the film industry up until then. The repetitive, menial and dexterous task of adding colour frame by frame was mostly relegated to female labour, and some film factories such as the Pathe laboratory in Vincennes employed hundreds of women for colour printing.

The addition of colour onto black and white stock often created layers of abstraction, accentuating the body’s disappearance in shimmering instances of flames, explosions, puffs of smoke and magical disappearance acts. Colour, added by invisible female hands, frequently served tosubsume the film’s actresses into a realm of abstraction. Joan’s hands are only just discernible from the dense layering of smoke, flame, and colour. Within the lightboxes are embedded sounds composed and performed by Norwegian vocalist Maja Ratkje, to counter both the silence of the original film, as well as the Inquisition’s challenging and final silencing of the voice of Joan of Arc, and the three voices she allegedly heard.

The work of Aura Satz encompasses film, sound, performance and sculpture. In recent years, she has made a collection of films that look closely at sound visualisation through various technologies and acoustic devices such as the Chladni plate, the Ruben’s tube, the theremin, mechanical music, phonograph grooves and drawn/optical sound. Earlier this year, Aura Satz exhibited a stunning new film and sound installation Impulsive Synchronisation at the Hayward Gallery which centred on the invention of ‘frequency hopping’, patented in 1941 by Hollywood star Hedy Lamarr and composer George Antheil. In 2012, Satz presented a filmic performance In and Out of Synch at the Tate Modern part of The Tanks: Art in Action series.