My Art Guides – Inside the Hong Kong protest 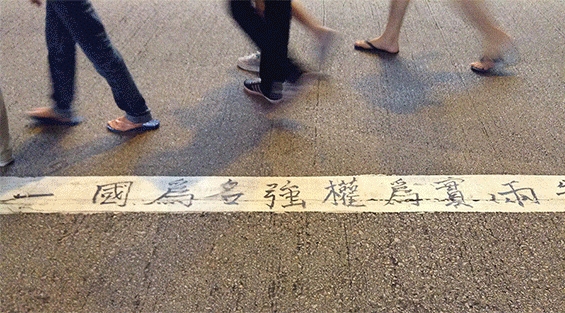 The street slogan “If not us, who? If not now, when?” has come with umbrellas, yellow ribbon, black t-shirts as well as the incessant social media feeds with hashtags #umbrellarevolution and #hkclassboycott across the city — voicing out support for the demands by Hong Kong Federation of Students and Scholarism against the decision of the PRC government and police violence with pepper spray and other weapons towards unarmed students described as being nice and polite.

“Many different forms of artistic intervention and actions (performances in public space, exhibitions and film screenings, just to name a few) have been taking place to draw the attention of the population to the debate on the use of public space, the wish to achieve universal suffrage and the freedom of speech,” says Krämer.

Calling such actions “very necessary” in keeping the definition of public space open to the people who constitute it, Krämer testifies that no other ways seem in sight to give voice to a public need — and because civil disobedience has to been seen in relation to given rules. As she notes, despite the strongly regulated public space limiting its predefined actions, the natural creativity of inhabitants in Hong Kong to appropriate public spaces for different meanings can inspire artists as well.

“I like to look at public space not as a given space but as a negotiable space of action asking for its different layers of significance.”For example, local artspace Woofeten’s booth during Occupy Mongkok has been about supporting neighbouring local shops instead of shopping malls and big brands. Another street project Stand By You: ‘Add Oil’ Machine, projected messages from the public through a website against walls and LED display. There have also been street performances and creative hacks by art students from the City University, for example, whose installation outside the Government Headquarter has taken the form of an umbrella tree sculpture.

Indeed artist Kacey Wong, with his previous pink tank and giant caonima (Grass Mud Horse) in support of Ai Weiwei and other current issues, described this as a “war on culture” which the winners will keep their way of culture — and that Hong Kong people deserve better.

While organising the Umbrella Revolution Logo Competiton, Wong has been speaking at his very own mobile classroom in Causeway Bay and Admiralty, calling into mind the exhibition Disobedient Object at V&A Museum in London which includes protest props from 1970s onwards that speak of beauty, truth, and of course a visual angle to the essence of social problems. Wong believes that being “big, lightweight and clear” as the art of protest, all creative individuals empowered with design skills and craftsmanship are able to develop interactive, mobile sculptures embedded with artistic meanings.

Moving to Hong Kong about 6 months ago, Ms. Nuria Krämer (Head of Connecting Space Hong Kong) has gradually discovered the city from very personal points of view of the artists she met on the way.

“I really would like to encourage Hong Kong people and artists to keep on doing as they did until now. Go on with this respectful, but very self-confident way to express the visions of a possible future society in Hong Kong,” she says.

She believes that artists have the capacity to capture and give form to continuously complex changing settings — and artists’ roles regarding recent events in Hong Kong have been indispensable.

“The power of art is to take into the frame of experience what otherwise is difficult to grasp. The value of art could therefore be seen in the creation of settings where these forms can conflict, provoke discussion and be experienced.”

“We need to render explicit our differences and understandings, in order to move the debate further in a fruitful way.”

Dr Yeung Yang (Founder and executive director of soundpocket; supporter of Art Citizens) believes that for such a movement to be possible, artists in their double capacities as citizens and artists would already have contributed prior to it: for striving to be in the world in more vibrant ways, for sharing ideas, skills and tasks, for seeking the truth in their art, and for insisting that we keep imagining possible lives, possible worlds that are to survive us.

She recalled the remark by independent curator Simon Njami that artists share a quality of silence as their inner language which would allow different background of artists and visions of the world to appear. And these are the supporting acts that may not be visible in the ‘space of appearance’ in the political actions (Judith Butler citing Hannah Arendt in Bodies in Alliance and Politics of the Street), but immanent as ways that artists are free.

“Artists could lend their sensitivity to the aesthetics of the politics by identifying it, and offering understanding, interpretation and articulation. Their capacity in attending to details is vital to our appreciation of the grain and rhythm of human action.

(The above quotes reflect the personal opinion of the interviewees and not the stance of their respective organisations.)

The interview with Ms. Jaffa Laam Lam (Senior Lecturer at Hong Kong Art School) took place on the same day as the annual show Fine Arts Asia opened in Wanchai and students at Occupy Mongkok started to get physically and verbally attacked by Anti-Occupy protesters on 3 October 2014.

In Lam’s artwork titled Gold Attacks! presented as a curated exhibition AntiqCuTe at the fair, one would find a traditional Chinese–style chamber pot on a spring-board. This “art-world exercise”, as Lam describes, involved much research and presentation to convince fair organisers — and it got sold already on the first day.

Yet there is one significant visual clue left out from the artist statement for the Chinese-speaking visitors to prove its link to the recent events.

Outside on the streets with the programme Umbrella Everywhere!, she has joined forces with her long-time friend, artist-researcher Wen Yau and a group of artists for the idea that “everyone can occupy a small area with an umbrella by writing down thoughts on top and open it everywhere”.

Lam’s long-time collaboration with ladies from the Hong Kong Women Workers’ Association, including her recent installation at the newly-completed the Jockey Club Innovation Tower at the Hong Kong Polytechnic University, has indeed taken the umbrella as a motif in her artist- led workshops- and umbrellas again appeared at in her installation Home at Setouchi Triennale in Japan. Yet she refuses to consider this event as any artwork at all.

This peaceful gesture on the streets and in shopping malls around Mongkok, as she emphasises, engages passer-bys to join them to draw their thoughts on top of the umbrellas — and she keeps on drawing flowers, for example.

“With passer-bys criticising us, or saying that it is what you artists would do, we will invite them along as this is a public event and we are just citizens — the media would love to take photos of us “as artists taking the hands of children” in drawing the umbrellas, but I had to just refuse, ” she laughs.

While there are creative works springing from recent events by the general public, she cannot agree that they can all be named as art — and especially the idea of herself as “artist” — since she believes that the entire campaign cannot be hijacked in this way, and that the role of citizen should come first and foremost as a shared identity.

“I would definitely hate to take advantage of this movement nor to take pride in the role as artist, given many sweat-soaked or even blood-stained efforts put in by so many others.

(The above quotes reflect the personal opinion of the interviewees and not the stance of their respective organisations.)