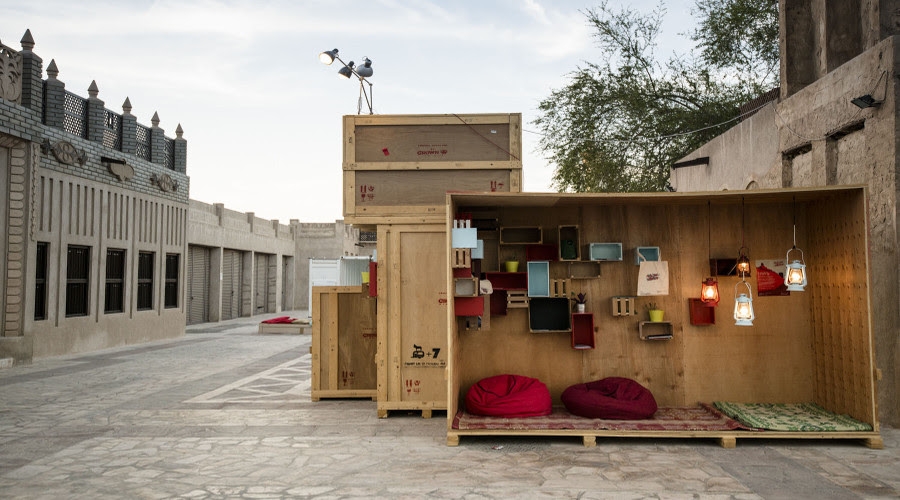 Sikka Art Fair is an annual showcase of Emirati and Dubai-based artistic talent designed to feature UAE contemporary art practices and initiatives, through a diversity of artistic talent and stance, providing opportunity to experience home-grown creativity at its liveliest and best, in the heart of Dubai. Sikka draws its name from the alleyways between the historic houses of Dubai, and serves as a metaphor that befits the young and upcoming artists who seek to establish their creative and professional paths through their participation in the fair.Originally focused on visual arts, Sikka Art Fair has now widened its scope to cover performing arts, film, and music.
With sessions open to the public and led by key players in Dubai’s culture and arts sector, Sikka also underlines the rich heritage of the Al Fahidi Historical Neighbourhood.

The fair will also host the Open Studios Exhibition, featuring works by the artists selected for the annual Artists-in-Residence (A.i.R) Dubai programme, with the participants creating site-specific work.

Khalil Abdulwahid, Manager of Visual Arts, Dubai Culture & Arts Authority, said: “We are confident that the artists will lend momentum to the region’s burgeoning arts scene, while establishing Dubai as an incubator that nurtures aspiring artists.”

A.i.R Dubai, infact, aims to support artists by providing a platform to develop their practice and create new work, while facilitating exchange between the artists, the local communities, and the broader cultural landscape.

– March 15, 6.30pm – 8pm | Local and Locality | A Round Table Discussion invites several local professionals / organizations to discuss Local and Locality, as a prelude to ISEA2014 (the 20th International Symposium on Electronic Art).

– March 18, 7pm – 10pm | Material Vs. Story | This talk highlights the link between the two, exploring how different use of material can affect the story being told. This is complimented with a scope of film screenings and physical puppets to be passed around the crowd.

– March 21, 7pm – 10pm | Realizing The Dream | Boubaker Boukhari will walk participants through the journey of realizing short animated films in the UAE. He will tackle the different sides of a short animated film, beginning with idea and script, developing character design and animation, and ending with post-production and distribution.

– March 22, 4.30pm – 6.30pm | Yusaku Imamura | Towards a creative city – the importance of platform, encouraging creative activity, as engine of the city.

– March 22, 7pm – 10pm | History of Animation | The Animation Chamber brings you this talk in collaboration with Dubai Museum of Moving Images. It will focus on how animation came to shape chronologically through moving paper toys and later manifested in cinema through the magic lantern and projection.

– March 24, 7pm – 8pm | Tasmena | A public round-table discussion inviting people to share personal experiences in and about the neighbourhood. Contributions will become part of an active installation onsite. The installation will allow the conversation to start before and continue after the tasmenaTALKS event.

– March, 7pm – 8.30pm | What Else Can The Book Do? | This talk will present The State as a practice: what they do, how they do it, and the thought behind each of their volumes. The talk will trace the editorial and design evolution of the project, followed by a discussion about the book as object, experimental publishing today and ‘what else can the book do?’