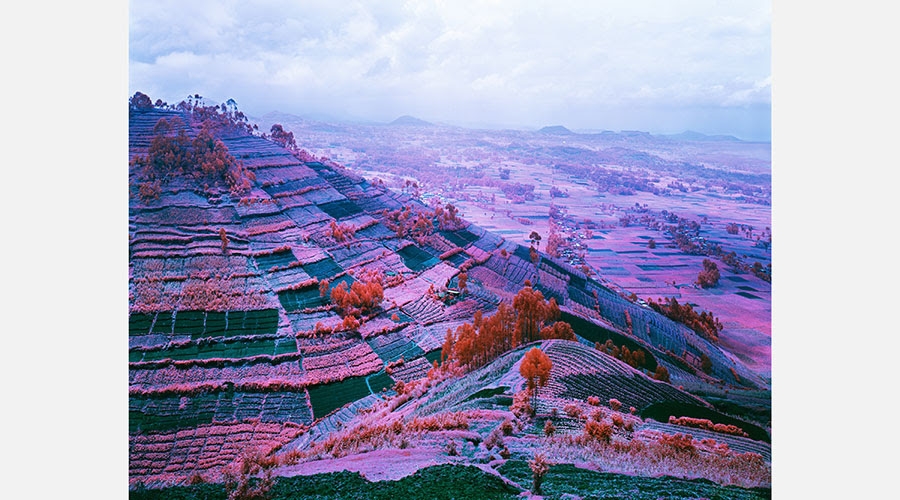 Galleries UNSW, Sydney, presents the Australian premiere of The Enclave by Irish artist Richard Mosse, which will run concurrently with the Sydney Biennale.

The Enclave represented Ireland at the 2013 Venice Biennale, and follows on from the photographic series, Infra (2010). To create this work Mosse returned to the eastern Democratic Republic of Congo (DRC), a region of tragically overlooked conflict that has seen at least 5.4 million people die of war related causes since 1998.

Comprised of six large double-sided screens installed in a darkened, otherwise empty, space, The Enclave is described as “physically immersive”, a term that stops far short of conveying the dizzying, disorientating and extremely confronting experience it delivers.

Mosse adopted an abandoned technology, Kodak Aerochrome, a 16mm film stock once employed by the military that registers the infrared light reflected from chlorophyll present in vegetation, and worked collaboratively with the cinematographer Trevor Tweeten to develop a style of long tracking Steadicam shots, resulting in a spectral, disembodied gaze. The work’s haunting soundscape is layered spatially by eleven-point surround sound, and is composed by Australian Ben Frost from recordings gathered during filming.

The work follows a group of rebel militias and also the surrounding communities, the images pulsing with an aggressive, highly saturated palette of bubblegum pinks, deep scarlets, rusts, mauves and vibrant cobalts. In this hallucinatory landscape of suffering, the Congo’s lush physical beauty is heighted by Mosse’s seductive aestheticisation, while the traumatic human context – often narratives so painful that they exist beyond language – is made shockingly visible.

Speaking to the Irish Times, Mosse said that “To try to reduce the situation in Congo to a simple, conventional narrative would be dishonest”, and his allegorical technique indeed represents a surprising kind of honesty within its surreal visual style and his foregrounding of authorship. Mosse’s target here is war photography itself, its grainy, gritty black and whites an aesthetic abnegation that assumes an ethical veracity that long ago became impossible to sustain.

Significantly the Congo was regarded as one of the first humanitarian disasters to be exposed to an international audience via the medium of photography, after documentation of King Léopold II of Belgium’s Congo Free State ‘project’ were published widely in the 1890s. The installation experience of The Enclave, with its multiplicity of viewpoints and narrative layering recalls the visceral “fragmented chaos” of Joseph Conrad’s Heart of Darkness, a highly contested depiction of the Congo during that time, and a text that Mosse acknowledges as an influence.

One of Conrad’s harshest critics was the late Nigerian writer, Chinua Achebe, who abhorred Heart of Darkness’ depiction of Africans – “to use me as a symbol may be bright or clever, but if it reduces my humanity by the smallest fraction I don’t like it”– and Mosse has met with similar criticism, as well as that of the work functioning as a kind of conflict pornography. But The Enclave’s giddying evocation of dread, grandeur and the persistence of everyday life – Mosse’s essential advocacy – makes everyone who appears on screen seem heartbreakingly real, closer, people just like you or me.