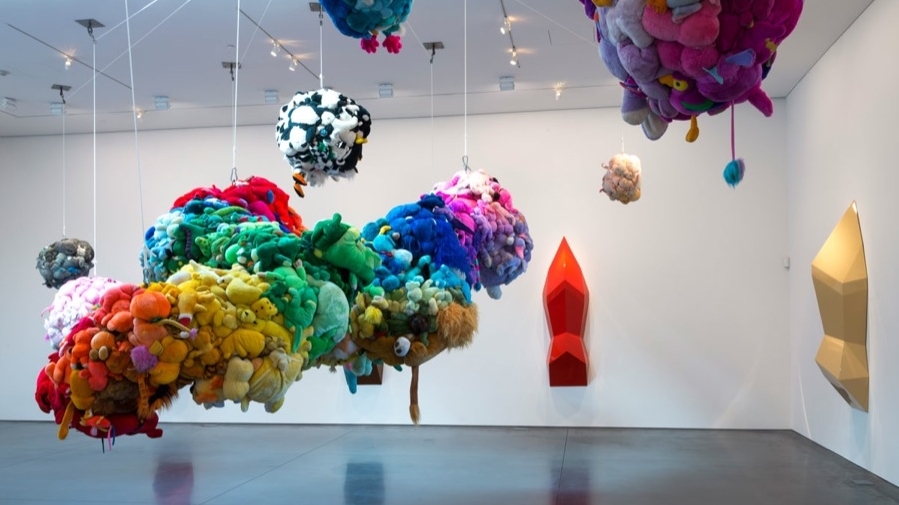 “My entrance into the art world was through the counter-culture, where it was common practice to lift material from mass culture and ‘pervert’ it to reverse or alter its meaning… Mass culture is scrutinized to discover what is hidden, repressed, within it.”- Mike Kelley Mike Kelley’s largest exhibition to-date will be displayed at MoMA PS1 from the 13th October until the 2nd of February 2014. Regarded as one of the most influential artists of our time, Mike Kelley (1954–2012) produced a body of deeply innovative work mining American popular culture and both modernist and alternative traditions—which he set in relation to relentless self- and social examinations, both dark and delirious. Over 200 works, from early pieces made during the 1970s through 2012, are brought together for the biggest exhibition MoMA PS1 has ever organized since its inceptual Rooms exhibition in 1976.Kelley was born in Detroit, he then lived and worked in Los Angeles from the mid-1970s until his tragic death last year at the age of 57. Over his thirty-five year career, he worked in every conceivable medium—drawings on paper, sculpture, performances, music, video, photography, and painting. Through his art, Kelley explored themes as diverse as American class relations, sexuality, repressed memory, systems of religion and transcendence, and post-punk politics. He brought to these subjects both incisive critique and abundant, self-deprecating humor.Kelley’s work did not develop along a purely linear trajectory. Instead, he returned time and again to certain underlying themes—the shapes lurking underneath the carpet, as it were—including repressed memories, disjunctions between selfhood and social structures as well as fault lines between the sacred and the profane. The work Kelley produced throughout his life was marked by his extraordinary powers of critical reflection, relentless self-examination, and a creative—and surprising—repurposing of ideas and materials.Mike Kelley is organized by the Stedelijk Museum, Amsterdam.The exhibition is curated by Ann Goldstein, Director, Stedelijk Museum, Amsterdam; in cooperation with the Mike Kelley Foundation for the Arts; and organized at MoMA PS1 by Connie Butler, formerly The Robert Lehman Foundation Chief Curator of Drawings at The Museum of Modern Art, now Chief Curator, Hammer Museum, Los Angeles; and Peter Eleey, Curator and Associate Director of Exhibitions and Programs, MoMA PS1. Curator of the first exhibition concept is Dr. Eva Meyer-HerMike Kellymann.
Artists:
Mike Kelley