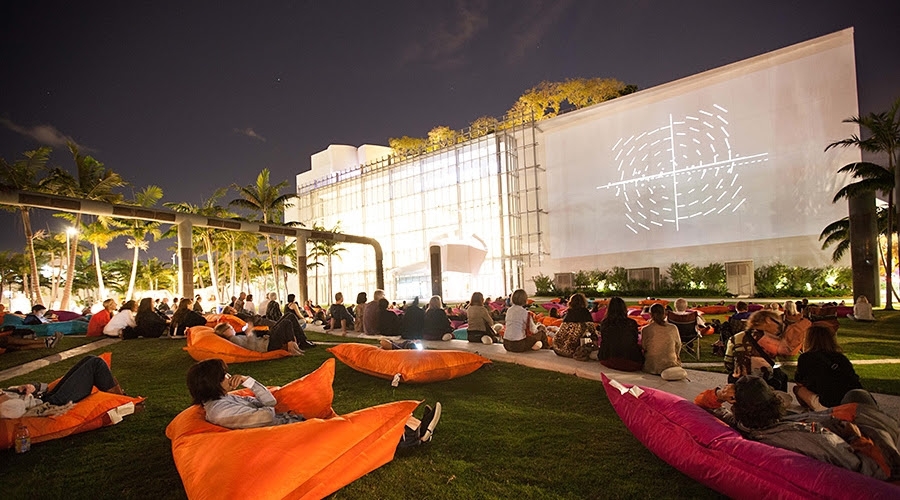 Organized in association with David Gryn, Director of London’s Artprojx, and Zurich collector This Brunner the Film sector presents works across two venues: inside the Miami Beach Convention Center, and in the outdoor setting of SoundScape Park where works are shown on the 7,000-square-foot outdoor projection wall of the Frank Gehry-designed New World Center.

The United States premiere of ‘Nan Goldin – I Remember Your Face’ (2013) by Sabine Lidl will be screened in the presence of Nan Goldin and Sabine Lidl, and will be followed by a Q&A with the artist and film director. Along with an exemplary insight into the seminal American photographer’s life, the film offers viewers a candid, sensitive and at times humorous perspective on contemporary culture. The feature film has been selected by This Brunner, a curator of Art Basel’s Film sector in Basel since 1992 and for the Miami Beach show since 2002. ‘Nan Goldin – I Remember Your Face’ (2013) will be shown at the Colony Theatre, 1040 Lincoln Road, Miami Beach at 8.30 pm on Friday, December 6, 2013. Entry is free, but seating is limited.

The third edition of David Gryn‘s selection for Art Basel’s Miami Beach show explores the collaborative creative process via intersections between visual artists, composers, musicians, choreographers, dancers and animators. Framed within eight distinct screening programs, the program highlights an international selection of emerging and established artists. Alongside works by leading international artists such as Shezad Dawood, Rineke Dijkstra, Nathalie Djurberg, Joan Jonas, Karen Kilimnik and Shirin Neshat, highlights include the international premiere of Martin Creed’s new film ‘Work No. 1700’ (2013), Kehinde Wiley’s ‘World Stage: Jamaica’ (2013), and a selection of works by Yinka Shonibare MBE exploring the interface between music and dance. Dara Birnbaum presents ‘Arabesque’ (2011/2013), specifically re-edited for the program. Art Basel’s Salon program will see Dara Birnbaum in conversation with David Gryn on December 6 at 1pm.
Outdoor screenings of the program take place at SoundScape Park on the 7,000-square-foot outdoor projection wall of the Frank Gehry-designed New World Center from December 4 to December 7. Admission to Film at SoundScape Park is free. Visitors are encouraged to bring blankets and lawn chairs. A program that includes nine additional films will be presented within five viewing pods inside the Miami Beach Convention Center. Access to the viewing pods is free with an entry ticket to the show.

Dec 4, 8pm | New World Center | Shuffle Notes – Beauty in Danger
A selection of artists’ films with a view towards animation and perception. The total running time is approximately 57′.

Dec 5, 9pm | New World Center | Tango at the Edge of the Fair
The program focuses on works that incorporate elements of dance and look at movement as an abstract narrative. The total running time is approximately 59′.

Dec 6, 8pm | New World Center | An Elegy for Voice and Silence The program looks at themes such as communication, self-reflection, introspection and the sense of belonging. The total running time is approximately 61′.

Dec 6, 9pm | New World Center | Farewell to the Past: Yinka Shonibare MBE
Yinka Shonibare MBE – known for work exploring cultural identity, colonialism and post-colonialism within the contemporary context of globalization – uses music and dance to captivate and engage the viewer by mirroring our world in a regal, beautiful and unexpected way. The total running time is approximately 65′.

Dec 6, 10pm | New World Center | Prelude to a Syncopation
Artists connect sound, choreography and social media – the results reveal diverse relationships between the visual, music and the meditative repetition of the ordinary and urban. The total running time is approximately 35′.

Dec 7, 10pm | New World Center | Fantasia for Dissonant Harmonies
In all the films in this program, the soundtrack plays a crucial role. The relationship that is developed between the visual and the audio builds a bridge to the location of the screening: the New World Center, Home of the New World Symphony, America’s Orchestral Academy. The total running time is approximately 68′